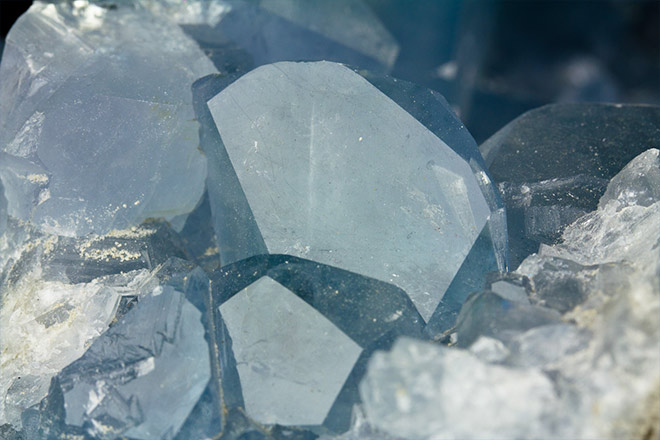 Celestite has the same structure as Barite (BaSO4), and forms very similar crystals. Celestite also forms with other colorful minerals, making very nice combinations. Blue Celestite with bright yellow sulfur is one of the most famous colorful combinations of minerals. The ideal composition of celestite is: SrO 56.42 % SO3 43.58 %. The blue color of celestite has been attributed to the presence of minute amounts of gold.

Celestite is only rarely an accessory mineral of ore veins which were formed from warm solutions. It is usually found in sedimentary rocks. The best occurrences are in cavities in sandstone or in limestone. The crystals usually form in the cavities and as geodes

Crystals can be bladed and show two large pinacoid faces top and bottom with small prism faces forming angles on every side. There are many variations, but the flattened blades and tabular crystals are the most common. If the pinacoid faces become diminished or are absent, the resulting prismatic crystal has a rhombic cross section. This habit is rather common in specimens from Madagascar. Celestite can also be nodular, fibrous or granular
TESTS:The flame test works best to distinguish celestite from barites, that may be of a similar color.
If the flame is a pale green, it is barite, but if the flame is red, it is celestite 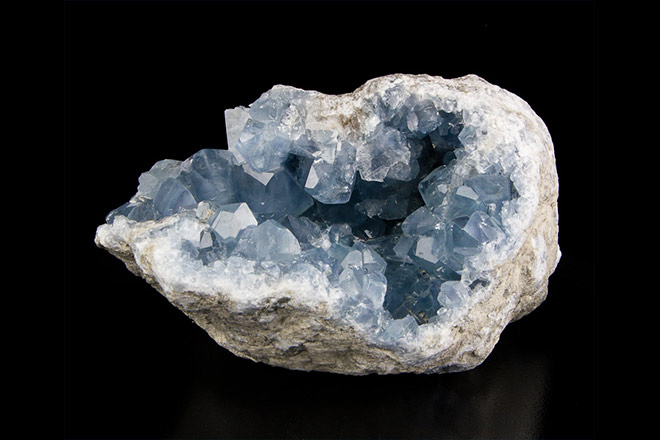 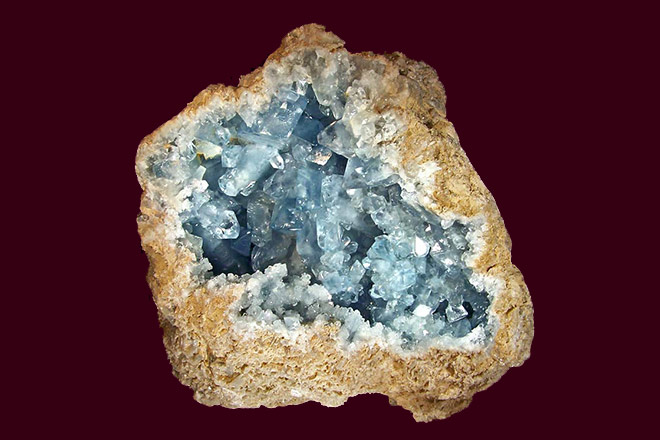 In the United States large crystals were found in a large limestone quarry. On Kelley Island, Lake Erie region of Ohio. Celestite was also found in Kansas, Michigan, New York and the Glen Rose Formation in Texas. Its color in these occurrences is very often the characteristic blue. Fine blue crystals are found near Manitou, Colorado, and blue radiating columnar crystal intergrowths are found at Cripple Creek, Colorado, in the gold mines. A blue fibrous vein material from Beliwood, Blair County, Peimsylvania, described in 1791, was the original celestite, the first discovery of this mineral. Clay Center, Ohio is another limestone quarry, where pockets are filled with fine blue-to-white bladed celestite, associated with a brown fluorite and yellowish calcite. Colorless transparent crystals occur with the colemanite in geodes of the Death Valley area. Reddish cloudy crystals are found near Toronto, Canada. In the Sicilian sulfur mines, fine white elongated square crystals, an inch or so in length are associated with sulfur. These are the ones mentioned in the composition section of this article. Geodes with large blue crystals much like those from Kelley Island are found in Madagascar. Which is where our specimens are from.

Celestite’s popular sky blue color makes it a wonderful mineral specimen. It is also used
as an ore of strontium. Celestite(strontium sulphate) is used in fireworks, because of its ability to burn with a bright red flame. The beautiful red color of most fireworks is caused by adding a strontium compound to the pyrotechnic mixture. Strontium also has uses in the chemical and pharmaceutical industries. Like Barite, Celestites heavy specific gravity makes it useful in rotary drilling mud.

Strontium is also widely used to manufacture glass for use in video displays like television sets. Almost all of the strontium used in this type of glass is imported, mostly from Mexico, in the form of the mineral celestite. Strontium is nontoxic and provides a dense glass that shields viewers from X-rays generated by the high voltage of cathode ray tubes. Because strontium is much less toxic than either lead or barium, it is now used almost exclusively for cathode ray tubes in televisions and computers.

Celestite derives its name from the Latin term caelestis which means (of the sky) and refers
to the blue color commonly observed in celestiteLocation: Large deposits of museum quality specimens of Celestite are found in Madagascar. Additional deposits are found in Austria, Britain, Canada, Germany, Italy, Mexico, Slovakia, and the United States (California and Ohio). 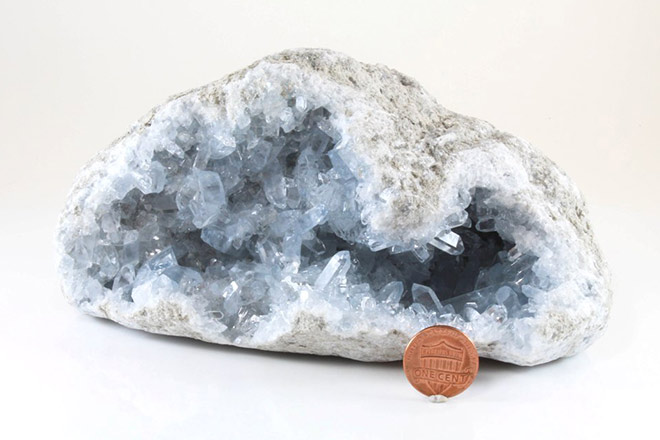 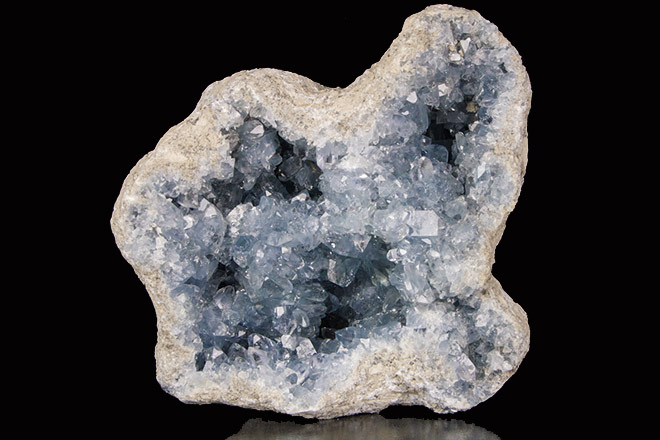 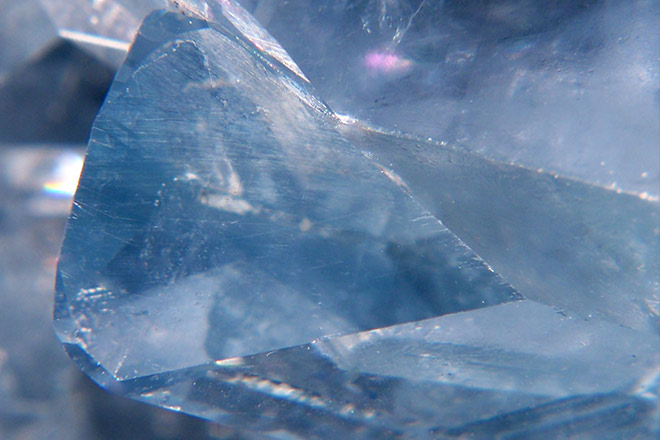