Calcium carbonate is a chemical compound with the formula CaCO3. It is a common substance found in rocks as theminerals calcite and aragonite (most notably as limestone) and is the main component of pearls and the shells of marine organisms, snails, and eggs. Calcium carbonate is the active ingredient in agricultural lime and is created when calcium ions in hard water react with carbonate ions to create limescale. It is medicinally used as a calcium supplement or as an antacid, but excessive consumption can be hazardous.

The main use of calcium carbonate is in the construction industry, either as a building material or limestone aggregate for road building or as an ingredient of cement or as the starting material for the preparation of builder’s lime by burning in a kiln. However, because of weathering mainly caused by acid rain, calcium carbonate (in limestone form) is no longer used for building purposes on its own, but only as a raw/primary substance for building materials.
Calcium carbonate is also used in the purification of iron from iron ore in a blast furnace. The carbonate is calcined in situ to give calcium oxide, which forms a slag with various impurities present, and separates from the purified iron. 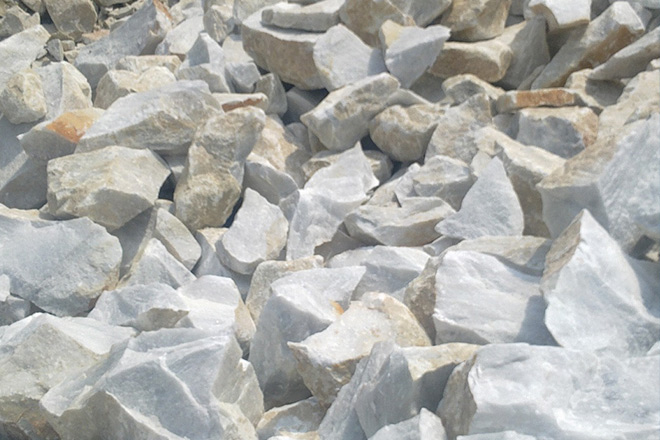 In the oil industry, calcium carbonate is added to drilling fluids as a formation-bridging and filtercake-sealing agent; it is also a weighting material which increases the density of drilling fluids to control the downhole pressure. Calcium carbonate is added to swimming pools, as a pH corrector for maintaining alkalinity and offsetting the acidic properties of the disinfectant agent.
It is also used as a raw material in the refining of sugar from sugar beet; It is calcined in a kiln with anthracite to produce calcium oxide and carbon dioxide. This burnt lime is then slaked in sweet water to produce a calcium hydroxide suspension for the precipitation of impurities in raw juice during carbonatation.
Calcium carbonate has traditionally been a major component of blackboard chalk. However, modern manufactured chalk is mostly gypsum, hydrated calcium sulfateCaSO4·2H2O. Calcium carbonate is a main source for growing Seacrete, or Biorock. Precipitated calcium carbonate (PCC), pre-dispersed in slurry form, is a common filler material for latex gloves with the aim of achieving maximum saving in material and production costs.
Fine ground calcium carbonate (GCC) is an essential ingredient in the microporous film used in diapers and some building films as the pores are nucleated around the calcium carbonate particles during the manufacture of the film by biaxial stretching. GCC or PCC is used as a filler in paper because they are cheaper than wood fiber. In terms of market volume, GCC are the most important types of fillers currently used. Printing and writing paper can contain 10–20% calcium carbonate. In North America, calcium carbonate has begun to replace kaolin in the production of glossy paper. Europe has been practicing this as alkalinepapermaking or acid-free papermaking for some decades. PCC used for paper filling and paper coatings is precipitated and prepared in a variety of shapes and sizes having characteristic narrow particle size distributions and equivalent spherical diameters of 0.4 to 3 micrometres.
Calcium carbonate is widely used as an extender in paints, in particular matte emulsion paint where typically 30% by weight of the paint is either chalk or marble. It is also a popular filler in plastics. Some typical examples include around 15 to 20% loading of chalk in unplasticized polyvinyl chloride (uPVC) drain pipe, 5 to 15% loading of stearate coated chalk or marble in uPVC window profile. PVC cables can use calcium carbonate at loadings of up to 70 phr (parts per hundred parts of resin) to improve mechanical properties (tensile strength and elongation) and electrical properties (volume resistivity). Polypropylene compounds are often filled with calcium carbonate to increase rigidity, a requirement that becomes important at high use temperatures. Here the percentage is often 20–40%. It also routinely used as a filler in thermosetting resins (sheet and bulk molding compounds) and has also been mixed with ABS, and other ingredients, to form some types of compression molded “clay” poker chips. Precipitated calcium carbonate, made by dropping calcium oxide into water, is used by itself or with additives as a white paint, known as whitewashing.
Calcium carbonate is added to a wide range of trade and do it yourself adhesives, sealants, and decorating fillers. Ceramic tile adhesives typically contain 70 to 80% limestone. Decorating crack fillers contain similar levels of marble or dolomite. It is also mixed with putty in setting stained glass windows, and as a resist to prevent glass from sticking to kiln shelves when firing glazes and paints at high temperature.
In ceramics/glazing applications, calcium carbonate is known as whiting, and is a common ingredient for many glazes in its white powdered form. When a glaze containing this material is fired in a kiln, the whiting acts as a flux material in the glaze. Ground calcium carbonate is an abrasive (both as scouring powder and as an ingredient of household scouring creams), in particular in its calcite form, which has the relatively low hardness level of 3 on the Mohs scale of mineral hardness, and will therefore not scratch glass and most other ceramics, enamel, bronze, iron, and steel, and have a moderate effect on softer metals like aluminium andcopper. A paste made from calcium carbonate and deionized water can be used to clean tarnish on silver.

Calcium carbonate is the most widely used mineral in the paper, plastics, paints and coatings industries both as a filler – and due to its special white color – as a coating pigment. In the paper industry it is valued worldwide for its high brightness and light scattering characteristics, and is used as an inexpensive filler to make bright opaque paper. Filler is used at the wet-end of paper making machines, and calcium carbonate filler allows for the paper to be bright and smooth. As an extender, calcium carbonate can represent as much as 30% by weight in paints. Calcium carbonate also is used widely as a filler in adhesives, and sealants.

Calcium carbonate is used widely as an effective dietary calcium supplement, antacid, phosphate binder, or base material for medicinal tablets. It also is found on many grocery store shelves in products such as baking powder, toothpaste, dry-mix dessert mixes, dough, and wine. Calcium carbonate is the active ingredient in agricultural lime, and is used in animal feed. Calcium carbonate also benefits the environment through water and waste treatment.

Calcium carbonate is critical to the construction industry, both as a building material in its own right (e.g. marble), and as an ingredient of cement. It contributes to the making of mortar used in bonding bricks, concrete blocks, stones, roofing shingles, rubber compounds, and tiles. Calcium carbonate decomposes to form carbon dioxide and lime, an important material in making steel, glass, and paper. Because of its antacid properties, calcium carbonate is used in industrial settings to neutralize acidic conditions in both soil and water.
Calcium carbonate crystals are referred to as calcite. The calcite crystal generally is considered a rhombohedron because of its cleavage properties. Cleavage is what causes crystals to angle where the bonding forces are weak and are apt to break into planes. Calcite is unique in that its cleavage takes three distinct directions. There are more than 300 forms of calcite crystals. Calcite crystals also come in many different colors, but usually are white or transparent. Another important property of the calcite crystal is its property of double refraction. Double refraction occurs when a ray of light travels through a medium and is split into two different beams, one traveling slowly, one traveling fast. The two different beams are bent at two different angles of refraction. As a result of this property a person looking through calcite sees two images.  This property of double refraction is a feature valuable to a number of optical applications.